One spontaneous night out in Philly this Saturday October 22, my friends and I decided to go to Penn Philippine Association’s (PPA) Kamayan food event, which then lead to a bubble tea outing, the Hillary/Kaine rally, and some new friends. Like I mentioned in a previous post about The Senior Year Mentality, I am trying to explore more outside of the Bryn Mawr bubble. I was informed of the Penn Philippine Association event by Alex Bernas (Haverford’18), the leader of Bi-Co Barkada, a Philippine Culture Appreciation affinity group. Unfortunately, Alex could not go because she was performing in the F amily Weekend orchestra concert. She asked some Barkada members if they were willing to lead a group of Bi-Co students to Penn, and I volunteered. Although only three Bi-Co members ended up going (Thanchanok Chaiprasit BMC’17, Lia Yoo BMC’18, & me), we still felt welcomed and had a great time. On the menu were Filipino staple foods Chicken Adobo, Pancit, Rice, BBQ Pork, Kare-kare, and choice of water, mango, or orange juice. I don’t eat Filipino food often, so this was a treat worth 2 servings of. Many other Penn students showed up because who doesn’t turn down free (and good) food? It’s a little intimidating to attend an event at a school you don’t go to, but I tried to be the outgoing type and introduced myself to the PPA event organizers. I started off by thanking them for organizing the event. It is definitely different organizing events at such a big school like University of Pennsylvania compared to Bryn Mawr College. You’re feeding and entertaining a lot more people. I then mentioned that I had been to the PPA Barrio Culture Show last spring and enjoyed it. Thanks to the Quaker Consortium, they knew of Bryn Mawr. What they did not know about Bryn Mawr was that there are very few students of Filipino descent, which is why Bi-Co Barkada is so small and consists of many non-Filipino students as well. Everyone from PPA was so welcoming to us Bryn Mawr students and even invited us to be part of the group photo. Being around so many Filipino students at Penn made me feel closer to my heritage as someone who is 1/4 Filipina and has not really explored her Filipina identity. At the event, a PPA member could somehow tell we were not from Penn (jokingly, because we were not pretentious enough!). After introducing himself and his brother who goes to Villanova, we found out that we had mutual friends. Apparently, one was part of an acapella group that performed at Bryn Mawr, and both brothers went to Don Bosco Prep School in New Jersey which is my hometown high school’s sports rival. After the PPA event ended, we went out to Ochatto for bubble tea (highly recommend) and ended up going to the Hillary Clinton/ Timothy Kaine rally on Penn’s campus together.

The rally was quite crowded. Doors had actually opened at 6:15pm, with rallies for Kate McGinty for Senate and Josh Shapiro for Attorney General. We did not get there until 8:30pm, but Clinton and Kaine did not take the stage until around 9:35pm. They had arrived late by helicopter. It was slightly miserable waiting in the cold for so long, but we got to know our new Penn friends a little more. They were both clearly Bernie supporters, but now support Hillary. When Clinton and Kaine finally entered the stage, the audience went wild cheering and chanting. It was difficult to see much from where we were standing, but if I jumped high enough, I could see their backs. Clinton and Kaine did not say anything drastically different from what was already reported in the news and said in the debates, so my friend and I left early to catch the train back to Bryn Mawr. I got what I wanted: to see Clinton and history being made in person with my own eyes. It is exciting to live in the largest swing state city in the USA because all the politicians and celebrity endorsers always pass through Philly. 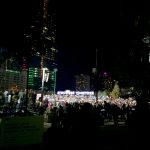 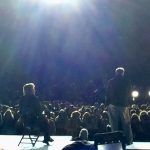 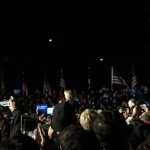 Overall, I was very satisfied with my night in the city well fed and in good company. I even got to know Bryn Mawr student Lia better outside of Bryn Mawr. Looking forward to more PPA events, and, of course, history being made on November 8 (remember to VOTE!).