The Bryn Mawr College Physics Senior Seminar class was in for a special treat on Monday October 24. Education specialists from Bryn Mawr College’s Blended Learning Initiative and Pearson Education Corporation brought in the latest Microsoft Hololens for students to test and give feedback on. Lucky for us, Pearson contacted Bryn Mawr College first about this demo opportunity because it turns out two Bryn Mawr alum work for Pearson! While the product is still in development, educators, gamers, and enthusiasts alike are already brainstorming uses in and out of the classroom.

We were split up in pairs and were assigned a supervisor from either Bryn Mawr Blended Learning or Pearson to guide us through the tutorial. The tutorial consists of a series of actions and skills to complete using your eyes as a cursor or the flick of your fingers as a select feature. The Hololens uses augmented reality technology, so it takes your actually surroundings and embellishes it with holograms, animations, and other audiovisual components. Other similar products may use total virtual reality, where what you see through the lens is totally different from real life. After the tutorial, we were allowed to play around with inputting holograms and images onto our sight of vision. Some holograms that stood out to me were the ballet dancer one and the hip-hop dancer one (can you tell I’m a dancer?). These holograms compared to the other ones looked pretty lifelike because they were modeled after actual people completing the actions. 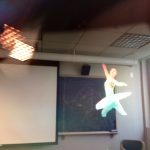 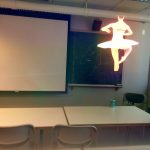 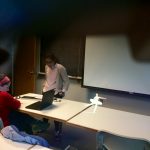 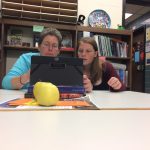 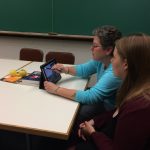 The Hololens allows its user to walk 360 degrees around animations and holograms to view them convincingly as 3D objects. There are also settings to pause, enlarge and reduce the size, and layer and suspend multiple animations in the user’s sight of vision. Another feature is the Skype setting, where a Hololens user can talk to another person using a tablet or laptop in a different room. The two in conversation can send images back and forth and write notes in a shared augmented reality vision. I had fun playing the two dancer holograms. At one point, I placed a miniature hologram of the ballet dancer on the table and took a Snapchat and picture by pressing my phone between my eye and the Hololens. Proud to say that two of those Snaps made the Women’s College Snapchat Campus Story!

At the end of the demo session, we regrouped to share our insights and propose potential uses for the technology in higher education. Some had suggested 3D modeling of electromagnetic waves, optic laser simulations, boundary condition visualization for particle-in-a-box problems, and 3D rotational mechanics. Many agreed that there still needed to be improvements in Skype usability and an expanded viewing area. Others suggested adding a typing feature as well because sometimes it is difficult and distracting to speak through the microphone in noisier settings. Pearson shared with other some of their future goals in implementing this technology with their education materials. In addition to 3D modeling, the envisioned having a hologram of a mentor giving realtime feedback to the Hololens wearer while performing a task. For example, a nursing student may be learning how to give an appropriate dosage amount. The hologram of the mentor through the Hololens could advise the wearer whether or not they were doing it correctly. I agree that there has to be much more improvements before Hololens can be implemented. Personally, I found the headset a bit heavy and uncomfortable. As a future nurse, I HOPE I go to a school where I can get the real deal: a real professor giving me feedback on my tasks. I do see hope in the Hololens in aiding real life dissections in lab, though. Having done a couple dissections this semester in my Anatomy & Physiology class, I do think it would be helpful for the Hololens to identify specific nerves and muscles while I perform a dissection. A professor cannot always be over my shoulder looking to see if I am dissecting correctly in a class of 10 students. In terms of total virtual dissections, my Anatomy and Physiology class already uses Mastering A and P, a Pearson virtual computer program. I think the Hololens version of Mastering A and P would not be too drastically different to merit a total switch from the older computer system. While I am not ready to accept the Hololens as a replacement for the highest quality education, I do see the potential in an alternative and supplemental education. I would much rather use the Hololens for recreational video games, Pokemon Go, or fake vacations. But at $5,000 per Hololens set, I’d rather get a new iPhone and laptop. Virtual Reality is still an interesting topic that deserves more exploration.