Mawrters in the Philadelphia area gathered at Everybody Hits last Friday October 7 for a special concert that night. Michelle Zauner ’11, known as Japanese Breakfast, headlined the sold out concert which also included Swanning and Mercury Girls. This date also coincided with the start of our Fall Break, so we had even more of a reason to go out to Philly and have fun (and not think about school). Before the Concert:
The Bryn Mawr dining halls were closed for dinner, so a bunch of my friends and I ate dinner together before the show. We ate family style at Shanghai 1 in Chinatown and waited in line for an hour and a half for $2 T-swirl crepes in celebration of their 2 year store anniversary. We did run a little late getting to the concert because of the crepes, but the crepes were worth it. Between bites of green tea ice cream and Matcha Azuki Bean crepe, I lead the way to Everybody Hits. I kind of misjudged how far away the venue was. Google Maps told me it would only be a 10 minute difference between walking and taking public transportation there, so we opted for walking. We eventually did get there and met up with some other Mawrters who arrived earlier. 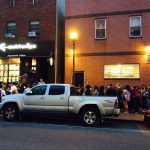 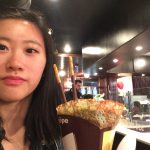 At the Concert:
We got there around 9:20pm. I was given the responsibility of checking in the 15 Bryn Mawr students who won tickets through the Asian Students Association ticket giveaway. (I’m not on the eboard anymore and my ticket wasn’t even covered by ASA, but I’m good friends with the co-presidents, so I still help out occasionally.) After we checked in, all16 of us Mawrters were there and could finally enjoy the show. Swanning was already in the middle of her set, but we managed to still catch a good portion of her songs. Check out her Bandcamp below:
Drawing Down the Moon by Swanning After Swanning played, there was a brief pause to set up for the next act, Mercury Girls. I was able to take a better look at my surroundings because they turned on the lights. Everybody Hits is actually a baseball batting cage by day, concert venue by night. The stage area was sectioned off by just a few strands of Christmas lights. Not much separated the audience from the bands other than a row of music synthesizers and electronics that ran at the front of the stage. We also ran into another Bryn Mawr alum, Paige Toft ’16, and caught a glimpse of another musician Ivy Gray-Klein ’14. Mercury Girls then took the stage with their slightly darker music. The band is actually composed of members from other bands Literature, Little Big League (also fronted by Michelle Zauner ’11), and Pet Milk. The lead singer held this intense stare with the audience accented by her thick eyeliner and stiff posture as she sang into her microphone. The guitarist was super into jumping and rocking out right next to her. I thought it was clever how toward the end when the band was playing their newer songs, the lead singer taped a piece of paper to her microphone stand to remind her of the lyrics. Check out Mercury Girl’s music on Bandcamp below:
Ariana by MERCURY GIRLS After the final switch up, Japanese Breakfast came on to perform songs off their recent and critically acclaimed album Psychopomp. I could tell that by this point, many more people had come in to watch because it was that much more crowded. Unlike the first two artists, I actually knew the lyrics to quite a few of the songs and lip synced along while watching my idol perform literally 1 foot away from me. Michelle has such great stage presence, and it makes anyone watching want to dance and jump along with her. My favorite songs from her include In Heaven, The Woman That Loves You, and Everbody Wants To Love You. She also played a cover of a famous song *which I forget the name of but liked.* I also liked her concluding song dedicated to feeling like a robot in love where she switched up her guitar for keyboard and vocal distortion and walked into the crowd and sang. At the end of her performance, the Mawrters anassed her loud and proud! Check her out on Bandcamp:
Psychopomp by Japanese Breakfast Michelle is just so cool, and I want to be her friend. I actually first found out about her because she toured with Mitski, another indie artist I’m a huge fan of and found through a Pitchfork article of Asian American artists my uncle sent to me. It wasn’t until I looked deeper into Japanese Breakfast that I found she was an alum! Next thing I knew, she was staring back at me from the cover of the Bryn Mawr College Alumnae Bulletin mailed to my house last summer! It’s so weird to think that she went to the same school that I go to. If I had the time, I would love to ask her questions about her experience at Bryn Mawr and being Asian American and an artist and post-grad life, etc. I did manage to have her sign the cut off cover of the Alumnae bulletin and organized a Bryn Mawr picture with her. Wishing her the best in her music career, and maybe I’ll see her someday at reunion… We managed to get a BMC pic with Michelle! I also got her autograph on the BMC Alumnae Bulletin cover & bought a pin! 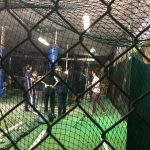 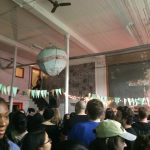