With this weekend being the final push before election day on Tuesday November 8, VietLead dispatched a team of volunteers to door knock in Southwest Philadelphia encouraging residents to get out to vote. I joined the team as an independent volunteer, as did two other people, but there were also four first year Swarthmore Asian Organization students, two representatives from the Asian Pacific American Labor Association in D.C., and four VietLead members, including the president of VietLead Nancy Nguyen. ead is working toward making the elections more accessible to Asian Americans. This also includes providing resources and assistance in multiple critical Asian languages such as Vietnamese, Chinese, and Khmer. Using public data on registered voters, VietLead maps out target commercial and residential areas with high Asian and Southeast Asian populations to reach out to. Many times, all it takes is a friendly phone call or in-person greeting to motivate someone to vote.

Another important initiative VietLead hopes to achieve is to get more young Asian Americans engaged with their communities. Through creating partnerships with college and university Asian students associations, VietLead is building a strong network of involved young people. Thanks to their funding, VietLead is able to accommodate their volunteers with transportation and meal reimbursements to and from the volunteer site. This is very helpful for college students like me because many Philadelphia neighborhoods with high minority populations are inaccessible by public transportation (especially during this SEPTA strike). 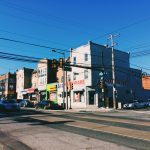 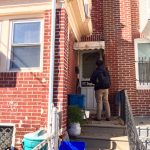 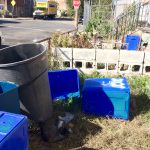 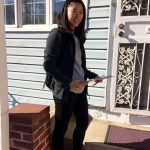 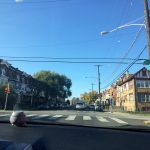 This Saturday November 5th, VietLead picked up the four Swarthmore volunteers and me from Swarthmore College (I took the 9:40AM Tri-Co van to get there) at 10:30AM and drove us to Southwest Philadelphia. We met up with the other volunteers and were given a quick run down of the door knocking script and how to record our canvassing results in our area packets. At around 11:30AM, we dispersed in pairs to our areas with our clipboards of household names and addresses, voter rights handouts in Vietnamese, Khmer, Chinese, Korean, and English, and some snacks all provided by VietLead. I was paired with the same volunteer I did voter registration outreach with a couple weeks ago. Together, we door knocked on all 62 houses and 85 residents in our assigned area in just under three hours. An estimated 40% were not home, but we did get the chance to talk to some friendly residents. Questions we asked included whether or not they were going to vote, if they knew their polling location, how they would get to their polling location, and if they needed language assistance.

After everyone finished their door knocking, VietLead treated us to dinner at Bubblefish sushi and bubble tea restaurant in Chinatown . It was my first time at the relatively new restaurant, and I enjoyed my sushi roll and grass jelly dessert. Unfortunately, the Swarthmore volunteers had to leave early so I did not get a chance to know them that well. That night was also the free Katy Perry concert for the Hillary campaign, and my friend Melody (who got me involved in volunteering with VietLead) left dinner early to go. I chose to stay and eat my meal at my own pace in the company of some other volunteers and VietLead president Nancy Nguyen who also chose to eat. It somehow turned out that I was the only college student left, so I had fun learning what others did in their post-grad lives (which I am so close to!). By the end of the day, I had met new people, explored a new part of Philly, and hopefully encouraged more Philadelphians to vote. If only I could get more Bryn Mawr students to join me…